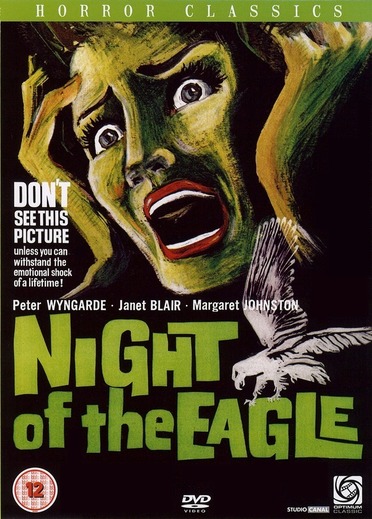 Night Of The Eagle
Night of the Eagle
A skeptical college professor discovers that his wife has been practicing magic for years. Like the learned, rational fellow he is, he forces her to destroy all her magical charms and protective devices, and stop that foolishness. He isn't put off by her

This is still the most frightening witchcraft movie together with Jacques Tourneurs "Night of the Demon"; that is, if you're willing to accept b/w format and prefer psychological (and emotional) drama to clinical special FX orgies. The acting is terrific, especially by the two antagonizing over-the-top female leads.
Some reviews pointed out that "Night ..." is a study in male rationalism vs. female irrationalism, but there is no doubt that the guys have to accept the powers whose existence they denied up to the last point. So the struggle is less male vs. female but rather the logical mind vs. the irrational drives in ourselves, both "angst" and destructive forces. (On the other hand, a little witchcraft can liven up life on the countryside, can't it?)
The print is good but still in fullframe (1.33) presentation instead of the original 1.66 widescreen ratio. This one SCREAMS to be on DVD! How about a double feature disc with "Night of the Demon"? I'll be the first one to buy!
Henry-X