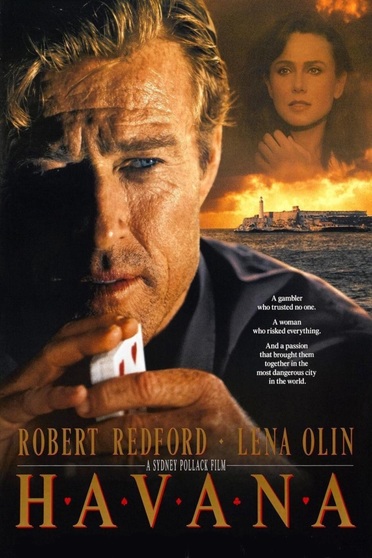 Havana
A gambler who trusted no one. A woman who risked everything. And a passion that brought them together in the most dangerous city in the world.

When Havana was released in 1990, a lot of reviewers unfavorably compared it to Casablanca, and those comparisons (in addition to audience indifference) turned the film into a box-office disaster. It deserved a better fate, because, while this is certainly no masterpiece, it's an intelligent and lavishly produced film about a chapter of history--the final days of Cuba under the collapsing Batista regime--that remains largely unfamiliar to the American mainstream. It's a compelling political backdrop for the story of a high-stakes gambler (Robert Redford) who comes to Cuba seeking the big score in poker games, following his expectation that high rollers will bet wildly as the Cuban government crashes around their heads. In Havana, Redford meets the wife (Lena Olin) of a Communist revolutionary (Raul Julia) with ties to Fidel Castro, and their attraction becomes powerfully mutual after her husband is presumed killed by Cuban police. What follows, as Cuba falls and Redford's character is forced into a crisis of conscience, is a mini-epic love story with tragic overtones, handled with great skill (albeit lagging pace) by longtime Redford collaborator Sydney Pollack. True, it's not nearly as memorable as Casablanca, but this is a worthwhile film, especially if you're interested in the political upheavals in pre-Castro Cuba. --Jeff Shannon