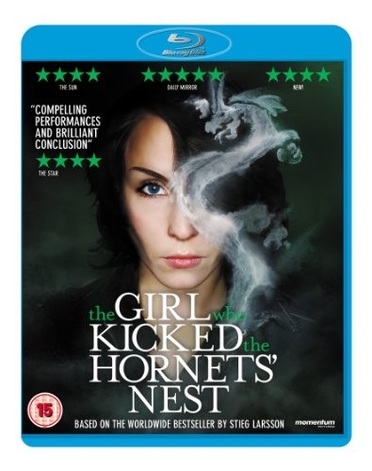 The Girl Who Kicked the Hornets' Nest

It takes a while, but the saga of one of the more fascinating characters put on the page or the screen in recent years comes to a satisfying conclusion with The Girl Who Kicked the Hornet's Nest, the last installment of the late Swedish author Stieg Larsson's so-called Millennium Trilogy. That character is Lisbeth Salander, the computer-hacking, Goth-loving, dark angel of revenge, played by Noomi Rapace with the same black stare and taciturn charisma that were so riveting in the first two films (The Girl with the Dragon Tattoo and The Girl Who Played with Fire, both also released in 2010). When we last saw her, Lisbeth was trying to kill her father, a Russian defector and abusive monster; in the process, the girl was seriously wounded by her half-brother, a hulking freak with a strange condition that renders him impervious to physical pain. As the new film opens, all three are still alive, and she's being taken to a hospital to recover while waiting to stand trial for attempted murder. Meanwhile, her champion and erstwhile lover, journalist Mikael Blomkvist (Michael Nyqvist), sets about uncovering the full extent of the conspiracy responsible for (among other crimes) Lisbeth's being sent to an asylum at age 12 while her father was protected by evil forces within the government. This investigation, which puts not only Lisbeth but also Blomkvist and his colleagues in considerable danger, leads to "the Section," a thoroughly repellent bunch of aging liars, killers, thieves, and perverts with a great many secrets they'd like to keep (the oily Dr. Peter Teleborian, who was responsible for Lisbeth's "treatment" as a child, emerges as the most vile antagonist since the guardian who brutally assaulted her in the first film). Although much of the exhaustive detail about these and other matters has been eliminated by director Daniel Alfredson (who also helmed The Girl Who Played with Fire) and screenwriters Jonas Frykberg and Ulf Ryberg for the purpose of adapting the novel to the screen, The Girl Who Kicked the Hornet's Nest is still quite long (148 minutes), and less kinetic and violent than the earlier films; there are some exciting sequences, but Lisbeth, previously an unlikely but magnetic action heroine, is seen mostly on a hospital bed or in a courtroom, and much of the film is spent on procedural matters. Still, the fact that the loose ends are wrapped up in fairly conventional fashion doesn't make the conclusion any less satisfying. In fact, the only real letdown comes from knowing that we won't get to see Noomi Rapace play Lisbeth Salander again. --Sam Graham