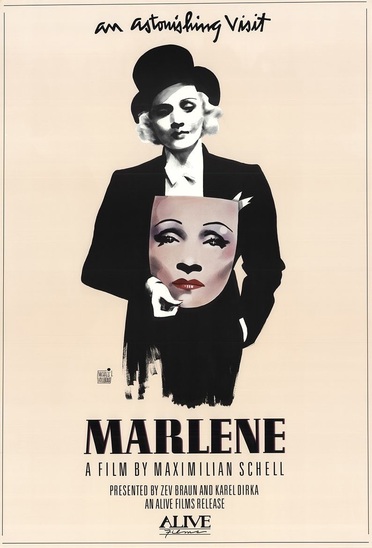 The fifth directorial effort of German film star Maximillian Schell, Marlene is an unorthodox documentary of the legendary Marlene Dietrich. After years of resisting Schell's entreaties, Dietrich finally agreed to participate in this project-but refused to appear on camera. Thus, a tape recording of a Dietrich-Schell interview is heard throughout, while the screen is filled with images of Marlene culled from stills, dramatic films (The Blue Angel, Shanghai Express et. al.) and newsreel footage. Still far from cooperative, Dietrich ignores Schell's questions, preferring to spin her own version of the Marlene mystique. Despite her efforts at self-protection, we are left with a fuller and more honest portrait of the actress than might have been possible in a traditional question-and-answer format. Originally released in Europe in 1984, Marlene was given its first wide American distribution in 1987. ~ Hal Erickson, All Movie Guide