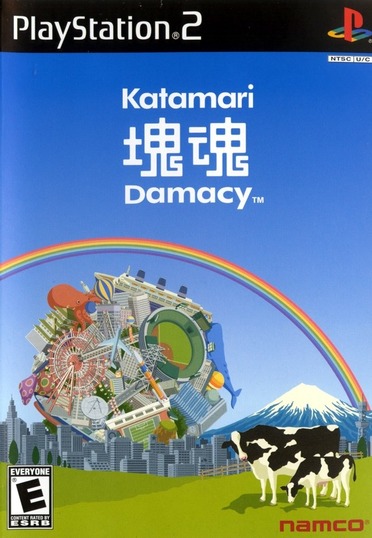 Katamari Damacy is a silly, colorful and occasionally hysterical game that's become a hit in Japan. Now it's arrived here and it's unusual gameplay and one-of-a-kind design will make gamers laugh and play for hours! When the King of All Cosmos accidentally destroys the stars in the sky, he orders his pint-sized princely son, to put the twinkle back in the heavens. He decides to do this by rolling everything and anything on earth into clumps, so he can replace what's missing in space.

Features: Play is controlled with the analog sticks only. No buttons to press. No combos to cause distress. Featuring ball-rolling and object-collecting gameplay mechanics of mesmerizing fluidity, reduced to Pac-Man simplicity, through pure absurdity. Dimensions change drastically as your clump grows from a fraction of an inch to a monstrous freak of nature. Go from rolling along a tabletop to ravaging through city streets, picking up momentum and skyscrapers along the way. Two-player battle mode lets you compete in a race to grow the biggest ball of stuff. Even the competition can be picked up, if your opponent is unfortunate enough to get in your way. Enjoy quirky, infectious humor throughout—from the insanely cosmic animations, to the wacky and wonderful musical stylings, to the royally contagious storyline that's undoubtedly like no other.