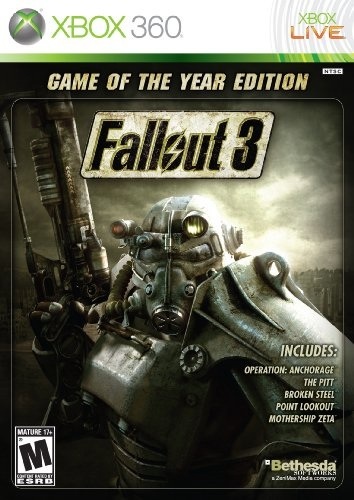 Fallout 3: Game of The Year Edition

Vault 101 - Jewel of the Wastes. For 200 years, Vault 101 has faithfully served the surviving residents of Washington DC and its environs, now known as the Capital Wasteland. Though the global atomic war of 2077 left the US all but destroyed, the residents of Vault 101 enjoy a life free from the constant stress of the outside world. Giant Insects, Raiders, Slavers, and yes, even Super Mutants are all no match for superior Vault-Tec engineering. Yet one fateful morning, you awake to find that your father has defied the Overseer and left the comfort and security afforded by Vault 101 for reasons unknown. Leaving the only home you've ever known, you emerge from the Vault into the harsh Wasteland sun to search for your father, and the truth.

This Game of the Year Edition includes the acclaimed Fallout 3 game as well as its five DLC packs - The Pitt, Operation: Anchorage, Broken Steel, Point Lookout and Mothership Zeta. Witness the harsh realities of nuclear fallout rendered like never before in modern super-deluxe HD graphics, from the barren Wasteland, to the danger-filled offices and metro tunnels of DC, to the hideous rotten flesh of a mutant's face Even the odds in combat with the Vault-Tec Assisted Targeting System for your Pip-Boy Model 3000; V.A.T.S. allows you to pause time in combat, target specific body parts on your target, queue up attacks, and let Vault-Tec take out your aggression for you; rain death and destruction in an all-new cinematic presentation featuring gory dismemberments and spectacular explosions

Features: Take in the sights and sounds of the vast Capital Wasteland! See the great monuments of the United States lying in post-apocalyptic ruin; you make the choices that define you and change the world; just keep an eye on your Rad Meter Vault-Tec engineers bring you the latest in human ability simulation - the Special Character System; utilizing new breakthroughs in points-based ability representation, special affords unlimited customization of your character; also included are dozens of unique skills and perks to choose from, each with a dazzling variety of effects The wizards at Vault-Tec have done it again; no longer constrained to just one view, experience the world from 1st or 3rd person perspective; customize your view with the touch of a button Feeling like a dastardly villain today, or a Good Samaritan, pick a side or walk the line, as every situation can be dealt with in many different ways, talk out your problems in a civilized fashion, or just flash your Plasma Rifle The key to reviving civilization after a global nuclear war is people; advanced version of Radiant AI, America's First Choice in Human Interaction Simulation; facial expressions, gestures, unique dialog, and lifelike behavior are brought together with stunning results by the latest in Vault-Tec technology