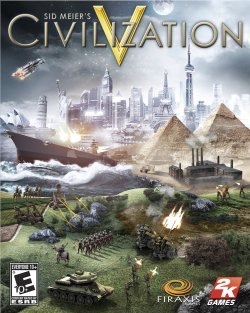 Sid Meier's Civilization V is a 4X video game in the Civilization series developed by Firaxis Games. The game was released on Microsoft Windows in September 2010, on OS X on November 23, 2010, and on Linux on June 10, 2014. In Civilization V, the player leads a civilization from prehistoric times into the future on a procedurally generated map, achieving one of a number of different victory conditions through research, exploration, diplomacy, expansion, economic development, government and military conquest. The game is based on an entirely new game engine with hexagonal tiles instead of the square tiles of earlier games in the series. Many elements from Civilization IV and its expansion packs have been removed or changed, such as religion and espionage (although these were reintroduced in its subsequent expansions). The combat system has been overhauled, removing stacking of military units and enabling cities to defend themselves by firing directly on nearby enemies. In addition, the maps contain computer-controlled city-states as non-player characters that are available for trade, diplomacy and conquest. A civilization's borders also expand one tile at a time, favoring more productive tiles, and roads now have a maintenance cost, making them much less common. The game features community, modding, and multiplayer elements. It is available for download on Steam. Its first expansion pack, Civilization V: Gods & Kings, was released on June 19, 2012, in North America and June 22 internationally. It includes features such as religion, espionage, enhanced naval combat and combat AI, as well as nine new civilizations. A second expansion pack, Civilization V: Brave New World, was announced on March 15, 2013. It includes features such as international trade routes, a world congress, tourism, great works, as well as nine new civilizations, eight additional wonders, and three ideologies. It was released on July 9, 2013, in North America and in the rest of the world three days later.