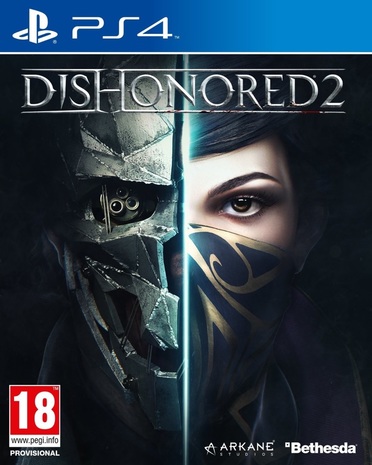 Dishonored 2 is the sequel to Dishonored and it is set about fifteen years after the events of the first game. It had different endings and this game picks up the story for the one with the best outcome for the characters. Corvo Attano, once framed for the murder of empress Jessamine Kaldwin and the kidnapping of her daughter Emily, has his name cleared and is now Royal Protector of Emily, the new empress of the fictional Empire of the Isles. She has to deal with the Crown Killer, someone who is against her will killing all her enemies and opposition, making it look like she rules with an iron fist and undermining her power. At the same time early on in the story she is deposed by the Delilah Copperspoon, known especially from the first game's story DLC, who claims the throne and says to be the older sister of Jessamine. She violently seizes power with the help of Luca Abele, Duke of Serkonos.

The change of regime is hostile and immediately the player has to choose between two protagonists, either Corvo or Emily, as the main character for the entire game. In the first game only Corvo was available and now there are two, each with their own supernatural abilities. Those can also be discarded entirely by rejecting the Outsider's help and just like the first title it can also be approached as a pure action game with melee and ranged combat, as a pure stealth game or as a mix of everything. Unlike the first game there is no silent protagonist as they both are voiced and speak throughout the game. The game is no longer set in Dunwall except for a short part early on, but in the coastal city Karnaca in the southern part of the Empire of the Isles. Architecture, fashion and technology now draw from 19th century European countries like Greece, Italy and Spain. Where the first game linked together environments as hubs with loading times, Karnaca has a more of an open world-style approach as a single environment, but the game still uses hubs as large sandbox environments for missions. There is a main quest to pursue, but the character can also freely explore and discover many side quests or optional activities in a random order. Overall there are nine, large missions that usually each have a distinct environment such as the Addermire Institute, the Clockwork Mansion or the Royal Consevatory. Next to the overall design many of these locations have very different mechanics. A ship called the Dreadful Whale often transports the character between missions.

Just like Corvo, Emily has access to the Outsider's Mark and can choose to use supernatural abilities or reject them entirely. Emily's abilities often focus on distraction and they are Domino to link the fate and actions of two or more characters, Doppelganger to create a clone, Far Reach as a grappling hook, Mesmerize to turn enemies into a dream state and Shadow Walk to turn into smoke for stealth or to move through vents. Corvo's familiar abilities are Bend Time, Blink, Dark Vision, Devouring Swarm and Possession. Abilities can be upgraded, for instance for Corvo's Blink to pass through glass without breaking it or Emily's Far Reach to snatch items harpoon-style. For stealth it is possible to knock out, drag and throw enemies, it is possible to distract using sound and alarms, and guards have an awareness meter based on sound, discoveries and alerting each other, and vision. The rat plague from the original game is replaced by blood flies. They can attack the character, but can also be turned into a distraction. When more enemies are killed, more flies appear.

Runes need to be discovered or bought at black markets to upgrade the abilities. The bone charm system of the original title returns, but in a new form. Players can now craft custom bone charms after unlocking that power, as equippable items that provide new powers. Bonecharms can add invisibility or invulnerability to specific actions or improve actions such as sprinting or swimming, or the regeneration of health or mana. Next to coins as the main currency, blueprints need to be located to upgrade the arsenal and there are paintings as optional collectibles. Based on the character's aggressiveness and assassinations, a chaos level is determined which influences the outcome.

Features: Reprise your role as a supernatural assassin in Dishonored 2 - the follow up to Arkane Studio's first-person action blockbuster and winner of more than 100 'Game of the Year' awards, Dishonored. Play your way in a world where mysticism and industry collide. Will you choose to play as Empress Emily Kaldwin or the royal protector, Corvo Attano? Will you make your way through the game unseen, make full use of its brutal combat system, or use a blend of both? How will you combine your character's unique set of powers, weapons and gadgets to eliminate your enemies? The story responds to your choices, leading to intriguing outcomes, as you play through each of the game's hand-crafted missions.