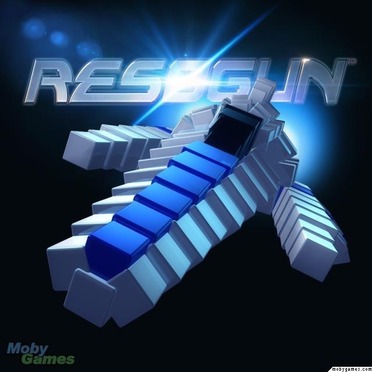 Resogun is a side-scrolling voxel based shooter and the spiritual successor to the Stardust games by the same developer. While those put a twist on the concept of Robotron: 2084, Resogun draws inspiration from Defender, but with fixed patterns of enemies similar to Galaga rather than randomized attacks. The game consists of five levels (Acis, Ceres, Decima, Febris, and Mefitis) with bright neon colours where the player steers a space ship that needs to survive as long as possible through three phases followed by a boss. Levels consist of backdrops that are wrapped around as a cylinder and it is possible to get a glimpse of the other side of the level. The ship can shoot and move left or right and there is no border to it.

Bonuses are earned by saving humans. These are shown as green figures locked up in chambers. Different types of space ships will attempt to kill the humans, who are only vulnerable when they are out of the chamber, and this need to be prevented by shooting down the invaders. At certain moments a human will be freed when certain enemies marked in green called keepers are destroyed. The ship can then pick up the human and drop it off at a marked location to set it free and receive bonuses such as boost, overdrive (more powerful weapons), smart bombs (clear the screen), shield or extra points. Boost provides a short moment of invincibility where the ship can crash into other ships destroying them, but also extending the boost. That way it can be maintained for a long time if the ship races through the enemy formations in a structured way.

Power-ups and bonuses appear as large green crosses that can be shot to open them. Players are encouraged to keep the destruction going to maintain a score multiplier, which has a different cap based on the chosen difficulty level. The game can be played in an arcade mode (complete the levels one after another) or with single levels. There are four difficulty settings (Rookie, Experienced, Veteran, and Master) and three ships (Nemesis, Ferox, and Phobos) to choose from with different parameters for agility, boost and overdrive. The game supports online cooperative multiplayer games, but not local ones.