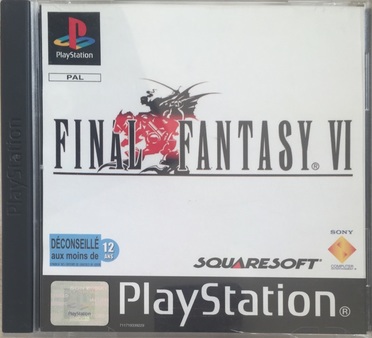 Final Fantasy VI (ファイナルファンタジーVI, Fainaru Fantajī Shikkusu) is a role-playing video game developed and published by Square (now Square Enix), released in 1994 for the Super Nintendo Entertainment System as a part of the Final Fantasy series. Set in a fantasy world with a technology level equivalent to that of the Second Industrial Revolution, the game's story focuses on a group of rebels as they seek to overthrow an imperial dictatorship. The game features fourteen permanent playable characters, the most of any game in the main series.
It was ported by Tose with minor differences to Sony's PlayStation in 1999 and Nintendo's Game Boy Advance in 2006, and it was released for the Wii's Virtual Console in Japan in March 15, 2011, followed by the PAL region on March 18, 2011 and North America on June 30, 2011. The game was known as Final Fantasy III when it was first released in North America, as the original Final Fantasy III had not been released outside of Japan at the time. However, later localizations used the original title.