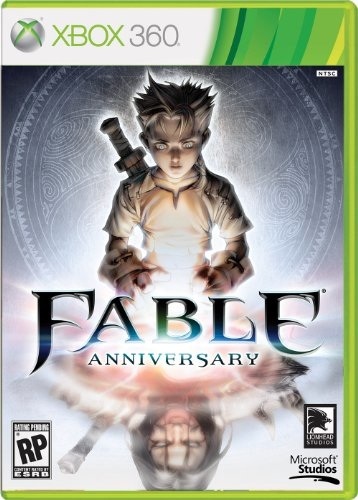 view larger For Every Choice A Consequence
As one of the best-selling RPGs on the original Xbox, Fable made sure every player's choice had a consequence. The world of Albion has inspired gamers to fall in love with the franchise for nearly a decade and counting.
Updated to HD to unlock the power of Xbox 360, Fable Anniversary is a major visual leap over the original. Vivid graphics and remastered audio result in a stunning re-imagination of Fable that will impress fans old and new.
This role-playing adventure puts you in full control of the choices that will determine your skills, appearance, and reputation. Create your life story from your early years as an inexperienced warrior to the prime of life as you become the most powerful being in the world. Choose the path of righteousness or dedicate your life to evil. And don't forget to hide the chickens — Jack of Blades is back.
With all new textures and 3D models, an entirely new lighting system, a slick new interface, achievements, and all of the content from "The Lost Chapters" expansion, Fable Anniversary is the definitive Fable experience for faithful fans and new players alike. Game Features Fully remastered HD visuals and audio Xbox Live Achievements for the first time in the original Fable adventure All-new UI and save system Includes all of the content from "The Lost Chapters" expansion Xbox SmartGlass integration* allows instant access to maps, mission, and story information, as well as art and screenshots from the original Fable
* Xbox SmartGlass content is available in English only. Compatible device with SmartGlass app required; ISP fees apply.
view larger Graphically Updated to HD
Fable Anniversary is without a doubt a major leap visually over the original Fable, with stunning graphics and audio remastered for the Xbox 360. The development team has devoted enormous resources into remaking the adventure, breathing new life into the beloved classic with advancements like vastlyimproved fidelity, lighting, special effects and more. The result is a stunning reimagination of the original game that will delight fans old and new. view larger New Interface, Save System, and Seamless Experience
Through the power of Xbox 360, gameplay in Fable Anniversary is more seamless than ever and this version boasts a new user interface system that’s been designed to simplify and make it faster and easier to explore the rich world of Fable and its menus. In addition to lightning-fast load times, there’s an all-new save system that’s been built from the ground up to provide the player with the ability to save anytime, anywhere, including during quests. Fable Anniversary also revitalizes the features that Fable fans have come to love with an updated, optional control scheme acclimated for fans that loved the play styles of Fable II and Fable III. view larger Achievements in Fable for the First Time
Fable Anniversary includes a full 1000 achievement points that are guaranteed to challenge and surprise new players and even the most veteran Fable fans as they explore the world of Albion again.

Features: Xbox Live Achievements for the first time in the original Fable adventure. All-new UI and save system. Includes all of the expanded content from Fable: The Lost Chapters. Xbox SmartGlass integration* allows instant access to maps, mission and story information, as well as art and screenshots from the original Fable. Fully remastered HD visuals and audio.