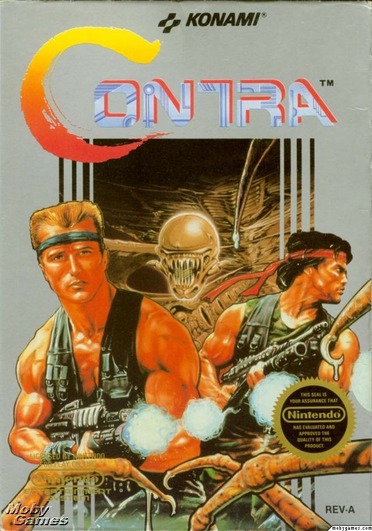 The First Contra game was fantastic. Most people, no doubt, have probably at least heard of the exploits of the game. No, Contra can't hold a candle up to games in terms of graphics and sound, and the people who bash on the game for that are probably too young to remember Contra, or they're too busy being stuck in the 3D era that side scrollers are too "kiddish" for them. Those gamers obviously haven't played old school. Contra is not only one of the hardest games out there (as most 8-bit and 16-bit games are a lot harder than the 32-bit and over generation), it's one the greatest of the NES generation.

What made Contra perhaps one of the greatest games wasn't just it's run and gun action. It was also the way it handles its two-player co-op. Rather than taking turns like in a game like Mario, or waiting for someone to switch to you like say... Donkey Kong Country, Contra put both characters on screen at a time and had you both running and gunning down enemies. The screen kept moving along as well. One character might end up leaving the other behind. Either way, Contra was one of the first games that forced you to work together instead of competing. Over the course of the game you (and your partner if you had one) would collect different types of weapons that went flying over head.

You began with the default rifle which only fired one shot at a time. Over the course of the game you could find different sorts of weapons. You could get a machine gun, a laser, a flamethrower or a spread gun. Also, there was a barrier, a rapid fire and a super bomb. You could only hold one type of gun at a time, but the latter group could be obtained without replacing the gun. Any Contra veteran can tell you that of all the guns, the Spread Gun was the best of the lot. It was powerful, spread your shots out and could hit anything. Combine the Spread Gun with Rapid Fire and you were nearly invincible. Keyword: Nearly.

Contra is often cited (along with Mega Man and its sequel Super C) as being one of the hardest 8-bit games out there. This is because when it came to your lives in Contra, you died in one hit. Not only that but you only began with two lives. Konami, feeling that yes, they had made a hard game, supplied gamers with a code they could use. Over the years this has become known to be the Classic Konami Code: Up Up Down Down Left Right Left Right B A Start. Any old school gamer who played Contra KNOWS this code. It gave you thirty lives. If, however, you really wanted to show your skills at Contra, you played without the code and you tried not to get hit at all! It can be done, but it takes a lot of practice.

Graphic and Sound wise, it's unrealistic to think the game could hold a candle up to the likes of Contra: Shattered Soldier or something like Metal Gear Solid 3. This doesn't mean the sound in Contra is bad. It's rather tiring to talk to some gamers who dismiss Contra simply because it's old, or because it can't survive. This, of course, is untrue, as many NES and SNES games have become some of the most sought after of all time. A game made in the 80's is not going to look like a game made in the new millenium. It seems kind of strange (and almost stupid) to have to point that out to the so-called "modern" gamer, when no one has to point out that a movie made in 1986 won't look like a movie made in 2006. If that makes me snobbish, so be it, but the modern gamer today does need to learn that the NES is not capable of, and will not be capable of, what the XBOX360 can do, and to compare to the two is like comparing apples and bananas. However, I find the music in Contra to be among the best of the 8-bit generation (nothing matches the very first Super Mario Bros., however). I often find myself humming these tunes.

Contra truly is one of the greatest games ever made. Not only did it pioneer two player co-op (the other game that comes to mind that did it so well is Turtles II), but it also provided the challenge that so many modern games are missing today. One hit kills, and being a one-man army up against it all. Some deaths might seem inevitable, but on the whole, Contra is a fantastic gaming experience. Those who have an NES (or perhaps an emulator) should own and play this game. At least for old time sake.