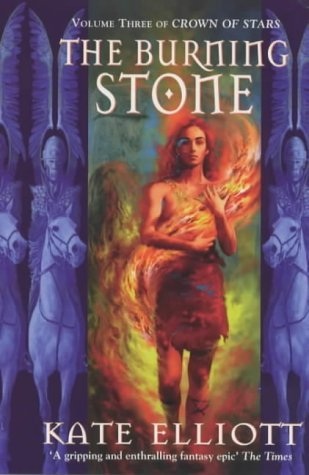 There is nothing more tragic than legitimate ambition comprehensively thwarted and Kate Elliott's fantasy sequence has a bleak sadness even in its moments of triumph, simply because her heroes and heroines seem as if they are never going to get the chance to be all they could be. Alan, suddenly adopted heir to the local noble, is obliged to marry an anorexic princess whose hobby of heresy extends to fake stigmata; royal courier Liath and more than slightly deranged royal bastard Sanglant find that their love stands in the way of the King's dynastic plans; the prattish monk Ivar runs away from heresy proceedings and hides among a young prince's boon companions and catamites. And while the nobility juggle marriages and churchmen bicker about doctrine, invaders mass on the borders and the world seems booked for cataclysms political and metaphysical. Elliott has not yet become as popular as she probably deserves--she has a real sense of what even an imaginary mediaeval world should be like, in its pompous scholarship and simple piety, and her characters are interestingly fluid; place Ivar in a cavalry charge and he does quite well. This third volume sustains the pace and grim tone of its predecessors in the Crown of Stars sequence. --"RozKaveney"