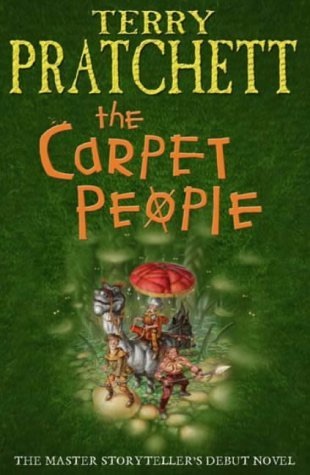 The story behind this story is nearly the best story of all: "This book had two authors, one aged seventeen, one aged forty-three. Both of them were Terry Pratchett." Having penned this tale and had it lapse into obscurity, Pratchett is impelled by his editors to revive it years later. Rightly so. For the dedicated PTerry fan, this example of his early writing is an illuminating read. Many views expressed in the Discworld books are readily perceived here. For someone new to Pratchett, it's a great introduction to the scope of his ideas and his writing skills. For any reader, it's simply a delight to enjoy.
The story is a fine example of Pratchett's ability to view the world from a fresh perspective. If there's a fantasy novel lacking a dark forest and mysterious creatures, i've missed it. Pratchett, never a formula writer, simply shrinks the scope. His forested world is a thickly napped rug. Instead of pines or oaks, it's nylon and wool "hairs". The creatures are there, the snargs, the hymetors and others - including silverfish, who live under the world. There are also people - the Munrungs, the Deftmenes and - the Dumii. They interact, sometimes violently. Deep down in the pile, these people and their communities are invisible to humans. Something, however, sends terror through the forest peoples - Fray. This immensely destructive force topples cities and obliterates villages.
Pratchett builds a story of the conflict of respected traditions countered by innovation and invention. There is an Empire, to which taxes are due. That means clerks, organisation, regulations. While the Munrungs have always met the demands for revenue, others have opposed the imposition, hence, the Empire. Could two such peoples find a common cause? It seems unlikely, but the best way to unite two dissimilar tribes is having a common enemy.
Except for the conflict of good and evil, this story avoids formula approaches to fantasy. There are many characters, all of them reflected by people around us. Snibril, a Munrung, stands out but a little from the rest. One of his attributes is that he suffers sinus trouble. This isn't normally a heroic virtue, but it proves valuable here. There's also a philosopher. Everybody thinks to some extent. Philosophers are typified by telling about it in an interesting way. This description, of course, fits Pratchett admirably. [stephen a. haines - Ottawa, Canada]