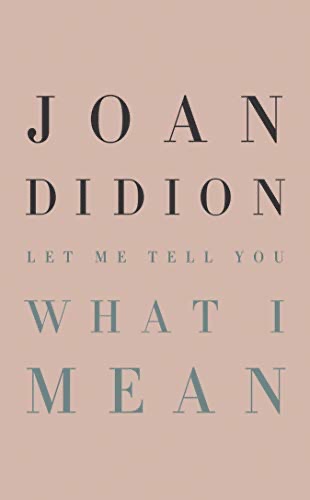 Let me tell you what I mean

From the universally acclaimed, best-selling author of the National Book Award-winning The Year of Magical Thinking: ten pieces never before collected that offer an illuminating glimpse into the mind and process of a legendary writer. Here are six pieces written in 1968 from the "Points West" Saturday Evening Post column Joan Didion shared from 1964 to 1969 with her husband, John Gregory Dunne about: American newspapers; a session with Gamblers Anonymous; a visit to San Simeon; being rejected by Stanford; dropping in on Nancy Reagan, wife of the then-governor of California, while a TV crew filmed her at home; and an evening at the annual reunion of WWII veterans from the 101st Airborne Association at the Stardust Hotel in Las Vegas. Here too is a 1976 piece from the New York Times magazine on "Why I Write"; a piece about short stories from New West in 1978; and from The New Yorker, a piece on Hemingway from 1998, and on Martha Stewart from 2000. Each one is classic Didion: incisive, bemused, and stunningly prescient"--
Read more...