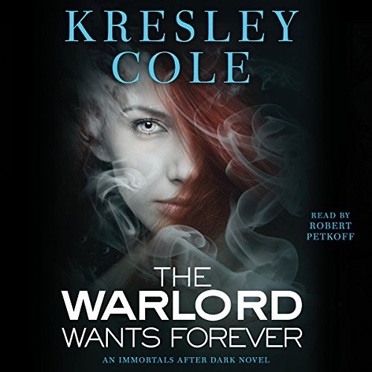 The Warlord Wants Forever (The Immortals After Dark Series Book 1)

EXCLUSIVE EBOOK NOVELLA with teaser chapters of the hugely anticipated LOTHAIRE
Nikolai Wroth, once a ruthless human warlord in the 1700s and now a general in the rebel vampire army, needs to find his bride, the one woman who can render him truly alive. As a turned human, he doesn't enjoy a heartbeat or breathing and is consequently weaker than fully blooded vampires. He wants his bride for the power she will bring him and can hardly believe it when his heart beats for Myst the Coveted, a mad, fey, mythological creature.
She eludes him for five years, but he has finally chased her to ground and stolen the jewel which commands her, giving him absolute power over her. While he possesses it, he can make her do anything, and he plans to in order for her to experience firsthand the agonizing, unending lust she'd purposely subjected him to for half a decade. Yet when Wroth realizes he wants more from her and frees her, will she come