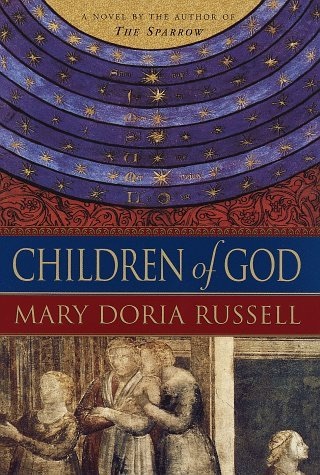 Mary Doria Russell's first novel, the award-winning "The Sparrow", proved that any stock sf theme can be renewed by hard thought and good writing. The first human expedition to the alien world of Rakhat ends in complex disaster; the only known survivor, the Jesuit linguist Emilio Sandoz, is brought back raped, mutilated and an emotional wreck--only by telling his story of complex cultural misunderstandings does he even gradually regain his sanity, if not his faith. Rakhat is a world with two intelligent species, not one--and the gifted biologists and musicians whose radio messages attracted Earth's attention not only enslave, but eat, the likable efficient peasants that humans first contacted. Sandoz is shanghaied back, by a coalition of the Church and the Mafia, only to find the situation even more complicated--he was not, after all, the only survivor. Sophie, infuriated by massacres, has started a revolution - and when prey determine to be rid of their predators, revolution becomes genocide. This is a powerful novel of religion, politics and bad choices--it is a sequel which intelligently undercuts and revises assumptions its predecessor imposed on us; like its predecessor, it is one of the key sf novels of the 90s. --"Roz Kaveney"