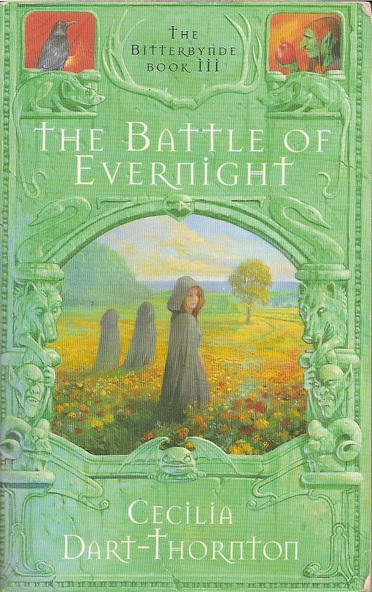 Bitterbynde: III - The Battle of Evernight

Australian author Cecilia Dart-Thornton concludes her high-fantasy trilogy, The Bitterbynde, with "The Battle of Evernight". The first title of the series, "The Ill-Made Mute", earned praise from fans, critics and colleagues; the lyrical novel's admirers include no less an authority than the Grande Dame of Fantasy, Andre Norton. The sequel, "The Lady of the Sorrows", garnered further acclaim.
In this third instalment, the once scarred and nameless mute, Tahquil has regained her voice, her looks, and some memory. But she and her companions, Viviana and Caitri, are stranded far from her beloved, and are being pursued by the tireless and dangerous Lord Morragan, Crown Prince of Faerie. Tahquil may not regain the rest of her memory in time to save her companions or herself. And even if she does, a shocking discovery may doom any possibility of love.
"The Battle of Evernight" is not for newcomers to Dart-Thornton's fantasy universe. Her trilogy has a complex plot and her world of Erith is developed with uncommon depth. Additionally, "The Battle of Evernight" has some structural problems. Too many of its early events don't really forward the plot. The climax occurs too far from the conclusion. And the ending's coy note may annoy fans as well as newcomers. Also, while not a structural flaw, the three main female characters are disappointingly passive, and seem to exist mostly to be acted upon by the males; for example, Tahquil observes the critical titular battle from a distance. If you're new to the Bitterbynde, start with "The Ill-Made Mute". "--Cynthia Ward, Amazon.com"