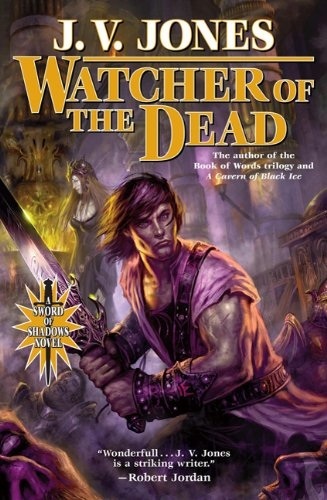 Watcher of the Dead

The epic fourth novel of the Sword of Shadows fantasy series

In this powerful saga of redemption and renewal, J. V. Jones brings to vivid life the magnificent tapestry of a world at once desperately fighting for survival against supernatural monsters and rent by internecine warfare. The frozen land at the north of the world was once ruled by a legendary nation of superhuman warriors. But that age has passed, leaving ancient clans to struggle for dominance as supernatural forces beyond their control threaten their very existence.

Amid the chaos of world-changing violence, unlikely heroes emerge. An unwanted warrior, a forsaken woman of power, the betrayed widow of a slain clan chief: these are the heroes rising to claim what has been taken from them and to reshape the world.

In a sharply observed narrative that illuminates these riven lives, Jones has crafted a human drama full of the excitement, suspense, and sheer storytelling power that have made the Sword of Shadows a fantasy series that transcends genre to become a memorable tale of human striving and triumph that speaks to readers as have few others.