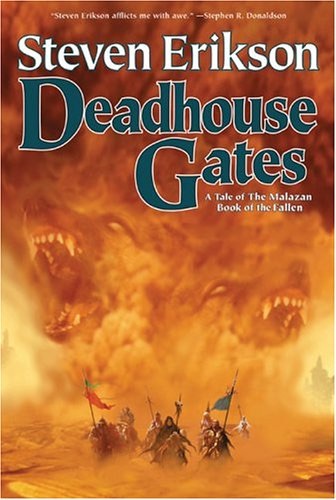 In the vast dominion of Seven Cities, in the Holy Desert Raraku, the seer Sha'ik and her followers prepare for the long-prophesied uprising known as the Whirlwind. Unprecedented in size and savagery, this maelstrom of fanaticism and bloodlust will embroil the Malazan Empire in one of the bloodiest conflicts it has ever known, shaping destinies and giving birth to legends . . .
Set in a brilliantly realized world ravaged by dark, uncontrollable magic, this thrilling novel of war, intrigue and betrayal confirms Steven Erikson as a storyteller of breathtaking skill, imagination and originality--the author who has written the first great fantasy epic of the new millennium.
(20050718)