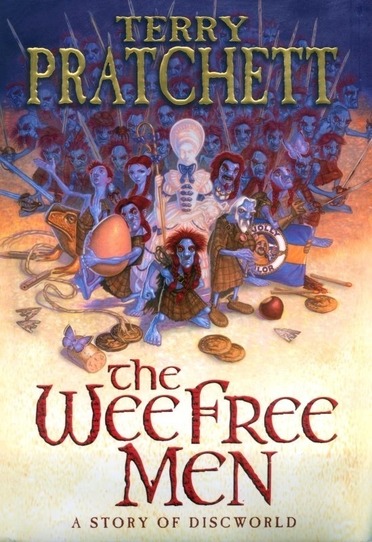 When you have an author as good as Terry Pratchett writing for children, you expect that the result will be a novel of great invention, assured comic timing and a generally all-round highly readable fantasy tour de force. Readers of The Wee Free Men will not be disappointed. After winning the prestigious Carnegie Medal award for his previous story of Discworld for younger readers, The Amazing Maurice and his Educated Rodents, Pratchett has followed up with another irresistibly entertaining adventure. Miss Perspicacia Tick, a witch of some renown, is worried about a ripple in the walls of the universe--probably another world making contact. Which is not good. This errant activity is centred on some chalk country--where traditionally good witches simply do not grow well. Fortunately, Miss Tiffany Aching of Home Farm on The Chalk, nine years old, misunderstood and yearning for excitement, wants to be a witch and has just proved herself to be of great potential by whacking a big Green Monster from the river with a huge frying pan while using her annoying younger brother as bait. Miss Tick is impressed. So, after travelling to the chalky downs at once and dispensing some stop gap advice to Tiffany about holding the fort until she gets back with more help, Miss Tick is off. Any hesitation Tiffany may have had about the seriousness of the situation expires when the Queen of the fairies kidnaps her younger brother. With the help of a talking frog, loaned by Miss Tick, and an army of thieving, warmongering, nippy, boozy wee free men called the Nac Mac Feegle (who used to work for the Queen but rebelled), Tiffany sets off rescue her kin. There's humour at every turn, and the situations that follow are both wonderfully dramatic and preposterously unreal. Pratchett really is the master of his genre and it's difficult to imagine a more entertaining read. (Age 10 and over) --John McLay