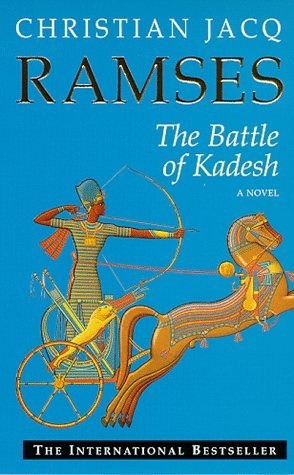 The Battle of Kadesh

'The Battle Of Kadesh', the third instalment in the acclaimed 'Ramses' series, is thus far the best and most compelling. It chronicles the next few years in Ramses' reign, during which the Great Pharaoh must confront the near invincibility of the Hittite forces who crave expansion at Egypt's expense. Before he can concentrate on war, however, Ramses' reign is being undermined by a network of different alliances against him, most notably that of Ofir, the sorcerer, trying to use black magic to weaken the Pharaoh's defences; And an underground network of Hittite spies intent in bringing about Egypt's downfall. Heading these operations is Shaanar, Ramses' jealous elder brother who is consumed with his desire to rule. When the Battle of Kadesh finally dawns, Ramses is left alone to confront the entire barbaric Hittite army, forcing him to call upon his late father's divine assistance. Will his prayers be answered ?
This book had me up reading until the early hours of the morning. With spectacular landscape descriptions, charismatic protagonists, and suspenseful plots it truly is impossible to put down.