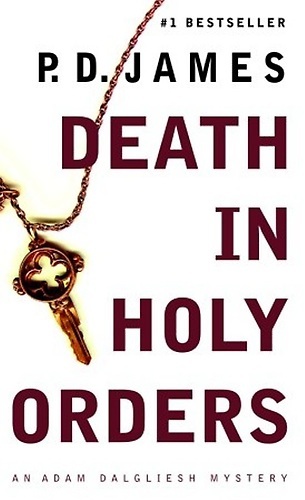 Death in Holy Orders is a 2001 detective novel in the Adam Dalgliesh series by P. D. James.
The novel is mainly set in and around an Anglican theological college, Saint Anselm's, on the windswept coast of East Anglia. It provides an insight into the structure of the Anglican Church and its training of students, known as ordinands, for a religious career.
Dalgliesh visits Saint Anselm's in a semi-official capacity to follow up the death of a student some time previously - his father was not satisfied with the verdict. Whilst there, a visiting Archdeacon is murdered. Dalgliesh is assigned the investigation, summoning D I Miskin and D I Tarrant from London to assist, as well as local officers. Initial suspicion falls on one of the fathers who run and teach at the college, as the archdeacon was known to be recommending the closure of the college.
Two more murders follow and after all present have been questioned, several skeletons are brought out the cupboard - including the fact that one of the students is unknowingly the son of one of the lay lecturers and that through his Mother, he will inherit the property, should it be closed and sold.