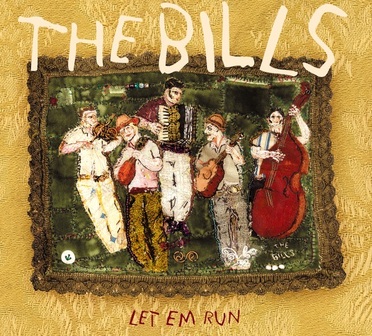 "Let Em Run" secures The Bills' place as one of the most dynamic and talented acts on the North American and Western European roots music scene. Formerly known as The Bill Hilly Band, the Juno Award (Canada Grammy) nominated ensemble is comprised of Marc Atkinson (mandolin), Chris Frye (lead vocals, guitar), Adrian Dolan (accordion, fiddle, piano), Glen Manders (double-bass) and Jeremy Penner (fiddle).
Drawing inspiration from all over the world, "Let Em Run" is a witch's brew and fusion of bluegrass, jazz, ragtime, Latin American and Gypsy influences with a sound all its own. The opening "Overture" gives a theatrical snapshot of the many musical styles of "Let Em Run." From the bluegrass-inspired "Hello" to the haunting instrumental "When the Bucket Runs Dry" to the several inventive songs written by Chris Frye, the Bills display both tight vocal arrangements and fierce virtuosic instrumentals. They transcend musical boundaries with such ease and fluidity that it is easy to see why the band is creating a buzz across such a broad spectrum of music fans. This is their finest work.