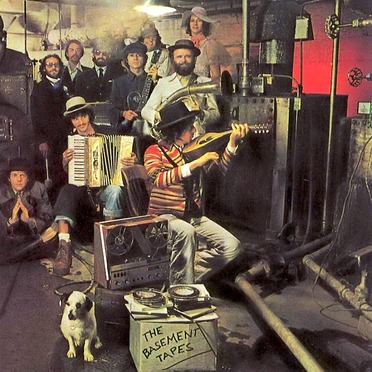 "The Basement Tapes" can be heard as a manifesto for the '90s' underlying Americana agenda or as the greatest album never intended for commercial release. Homegrown 1967 recordings taped in the Band's fabled Big Pink hermitage in Saugerties, New York, many of the 24 songs resonated across American and English rock and folk long before their belated 1975 release through studio interpretations by the Byrds, Fairport Convention, Manfred Mann, Peter, Paul & Mary, and numerous other acolytes, as well as through myriad unauthorized bootlegs. Good as the covers were, Dylan and the Band rolled their own with an extraordinary coherence that sounds only more authentic in these rough-hewn, intimate, always musical performances, which dovetail with Dylan's stark "John Wesley Harding" and the Band's stunning debut, "Music from Big Pink" as well as the presciently lo-fi "The Band". At a time when most rock culture was entranced with its post-atomic origins, these songs sounded timeless, plunging into pre-industrial folk, turn of the (20th) century barrelhouse and blues, and crackling, vintage rock & roll excursions with offhand verve and a thrilling disregard for what was hip. Time has only reinforced their visionary power. --Sam Sutherland