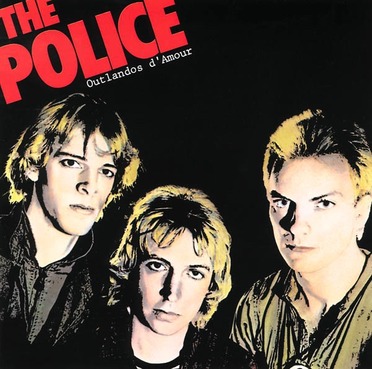 "Outlandos D'Amour" is a product of the late-'70s British punk scene, but the Police were never really punks. The album lacks the class-conscious awareness that fueled early Clash albums or the angry, antimusical nihilism of the Sex Pistols. The material, although constructed with guitar, bass, and drums, often at tempos that would never be matched in their later studio recordings, stands apart. Andy Summers' guitar textures are here more traditional and without their later ethereal quality, but his chord choices on "Roxanne," for example, or his expansive solo lines on "So Lonely" would have baffled most of the burgeoning punk guitar school. So, too, would Stewart Copeland's drumming, enriched as it is by a multinational upbringing and stage experience in the last gasps of the progressive-rock movement. The rhythms of reggae are woven into the music and Sting's vocals pay conscious tribute to Bob Marley. The songs are mostly about love, or a lack of personal connection, and are frequently obsessive; the hits alone are worth the price of the album. "--Al Massa"