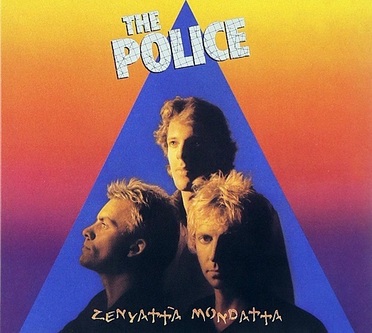 The stage was set for the Police to become one of the biggest acts of the '80s, and the band delivered with the 1980 classic Zenyatta Mondatta. The album proved to be the trio's second straight number one album in the U.K., while peaking at number three in the U.S. Arguably the best Police album, Zenyatta contains perhaps the quintessential new wave anthem, the haunting “Don't Stand So Close to Me,” the story of an older teacher lusting after one of his students. While other tracks follow in the same spooky path (their second Grammy-winning instrumental “Behind My Camel” and “Shadows in the Rain”), most of the material is upbeat, such as the carefree U.S./U.K. Top Ten “De Do Do Do, De Da Da Da,” “Canary in a Coalmine,” and “Man in a Suitcase.” Sting includes his first set of politically charged lyrics in “Driven to Tears,” “When the World Is Running Down, You Make the Best of What's Still Around,” and “Bombs Away,” which all observe the declining state of the world. While Sting would later criticize the album as not all it could have been (the band was rushed to complete the album in order to begin another tour), Zenyatta Mondatta remains one of the finest rock albums of all time.