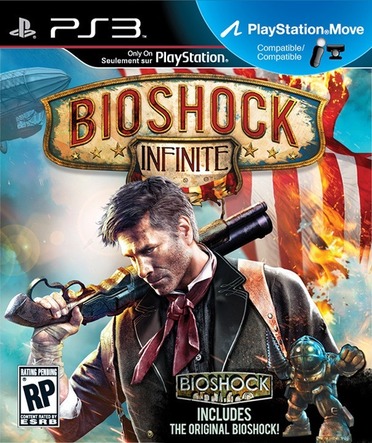 Indebted to the wrong people, and with his life on the line, hired gun Booker DeWitt has only one opportunity to wipe his slate clean. He must rescue Elizabeth, a mysterious girl imprisoned since childhood and locked up in the flying city of Columbia. Forced to trust one another, Booker and Elizabeth form a powerful bond during their daring escape. Together, they learn to harness an expanding arsenal of weapons and abilities, as they fight on zeppelins in the clouds, along high-speed Sky-Lines, and down in the streets of Columbia, all while surviving the threats of the air-city and uncovering its dark secret. WINNER OF OVER 80 AWARDS

Features: The City in the Sky - Leave the depths of Rapture to soar among the clouds of Columbia. The flying city is a beautiful and vibrant world that holds a very dark secret. Unlikely Mission - Set in 1912 former Pinkerton agent Booker DeWitt must rescue a mysterious girl from the sky-city of Columbia or never leave it alive. Tear Through Time - Open Tears in time and space to shape the battlefield and turn the tide in combat by pulling weapons and other resources out of thin air. Vigorous Powers - Throw explosive fireballs and shoot lightning as devastatingly powerful Vigors surge through your body to be unleashed against all that oppose you. 1999 Mode - Open your own Tear to 1999 to experience the design and balance that hardcore gamers enjoyed back in the 20th century.