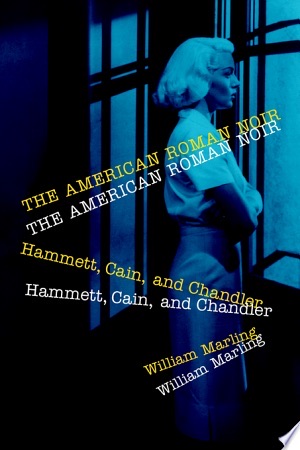 In "The American Roman Noir", William Marling reads classic hard-boiled fiction and film in the contexts of narrative theories and American social and cultural history. His search for the origins of the dark narratives that emerged during the 1920s and 1930s leads to a sweeping critique of Jazz-Age and Depression-era culture. Integrating economic history, biography, consumer product design, narrative analysis, and film scholarship, Marling makes new connections between events of the 1920s and 1930s and the modes, styles, and genres of their representation. At the center of Marling's approach is the concept of "prodigality": how narrative represents having, and having had, too much. Never before in the country, he argues, did wealth impinge on the national conscience as in the 1920s, and never was such conscience so sharply rebuked as in the 1930s. What, asks Marling, were the paradigms that explained accumulation and windfall, waste and failure? Marling first establishes a theoretical and historical context for the notion of prodigality. Among the topics he discusses are such watershed events as the trial of Sacco and Vanzetti and the premiere of the first sound movie, "The Jazz Singer"; technology's alteration of Americans' perceptive and figurative habits; and the shift from synecdochical to metonymical values entailed by a consumer society.

Marling then considers six noir classics, relating them to their authors' own lives and to the milieu of prodigality that produced them and which they sought to explain: Dashiell Hammett's "Red Harvest" and "The Maltese Falcon", James M. Cain's "The Postman Always Rings Twice" and "Double Indemnity", and Raymond Chandler's "The Big Sleep" and "Farewell My Lovely". Reading these narratives first as novels, then as films, Marling shows how they employed the prodigality fabula's variations and ancillary value systems to help Americans adapt--for better or worse--to a society driven by economic and technological forces beyond their control.