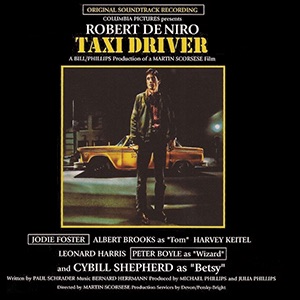 Being a student of composing for film and tv, I was looking forward to hearing Bernard Herrmann's unadulterated, original music for the great film Taxi Driver. Unfortunately the original release on CD from Arista consists of 10 tracks, the first 5 of which are pointless jazz funk workouts of Hermann's themes by session musos, arranged by Dave Blume. Track 6 is a collage of Travis Bickle soundbites over a pasted together backing track. It's not until you get to track 7 that the original music is heard, conducted by Herrmann. This is the real thing - exquisitely composed and orchestrated, this is film music of the highest calibre, but the total minutes of this actual soundtrack material add up to 9.55! Do yourself a favour and make sure you buy this product brand new. It's only the newer version which has the track listing illustrated on this product page.