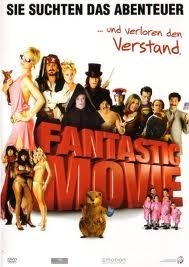 Fantastic Movie
Epic Movie
We Know It's Big. We Measured.

Four troubled orphans from four separate movie scenarios who are bound together in a wacky chocolate factory after receiving golden tickets to go on an 'epic adventure.' After they escape from the clutches of a very scary Willy Wonka they discover the magical world of 'Gnarnia' through an enchanted wardrobe. There they must seek the help of a randy lion, a hoard of mutants from the x academy, students of witchcraft and wizardry, funky swash-buckling pirates and a mischievous beaver to defeat the evil white bitch!