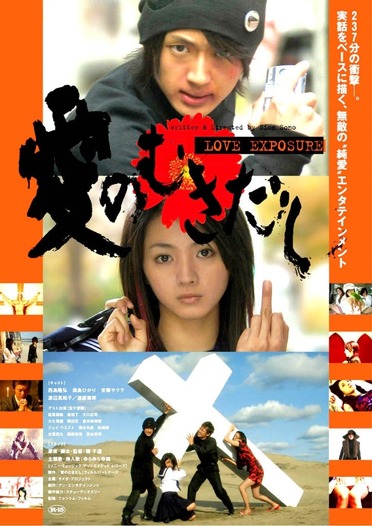 One young man's journey to find the girl of his dreams and please his father takes an unfathomable number of wrong turns and bizarre detours in this epic-scale comedy-drama from writer and director Sion Sono. Yu Honda (Takahiro Nishijima) grew up believing in his mother's admonition to find and marry a girl who was pure of heart when he grew up, and after her death, Yu's father (Atsuro Watabe) became a Catholic Priest who becomes very interested in the state of Yu's purity. Father is convinced Yu is guilty of more sins than he's willing to confess; that isn't actually the case, but in order to please his dad, Yu sets out to rack up a more impressive record of wrongdoing. Yu becomes a small time pornographer, trafficking in photos surreptitiously taken by pointing his camera up the skirts of young women, and his work is impressive enough that he's approached by an adult film company to star in a string of porn films for them. But just as Yu is getting involved in some serious sin, he meets Yoko (Hikari Mitsushima), a beautiful and virginal teenage girl who is appalled by the behavior of most men -- so much so that she constantly challenges them to martial arts battles that she invariably wins. Yu sets out to win Yoko's heart, but their courtship attracts the attention of Aya Koike (Sakura Ando), a member of a religious cult who thinks she can recruit them to their numbers. Ai No Mukidashi (aka Love Exposure) was an official selection at the 2009 New York Asian Film Festival.