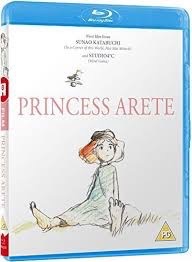 Confined in the castle tower by her father, princess Arete spends her days watching the world outside her window. While she looks out at the common people working, the knights of the kingdom compete for her hand in marriage by searching for powerful magical items from a race of long-dead sorcerers.

When a sorcerer called Boax comes to the castle, he sets about persuading the King to let him marry the princess. But he secretly fears a prophecy which foretells Arete ending his life – leading him to imprison her the minute she’s in his castle!

Based on the 1983 story "The Clever Princess" by Diana Coles, this is a chance to see a story that fascinated Japan on the big screen.

Presented in a rigid case, with a digipack to hold the Blu-ray and DVD discs. Also included are 4 art cards showcasing imagery from the film.