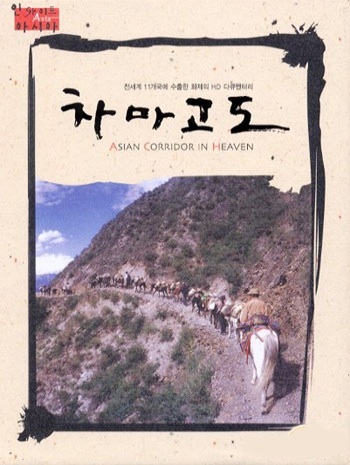 This is a 5,000 kilometer journey on the world's highest, oldest, most Beautiful and heavenly path.

Part of the Insight Asia series, Asian Corridor In Heaven is a six-episode HD documentary series co-produced by KBS and NHK about the world's oldest trade route, the "Ancient Tea and Horse Caravan Road". Pre-dating the Silk Road by 200 years, the Ancient Tea and Horse Caravan Road crossed from the Sichuan and Yunnan provinces of Southwest China over mountainous terrain into Tibet, Nepal, and India. The Caravan Road was not only an important route for the trade of tea and horses, but also a corridor connecting Chinese and Tibetan language, people, religion, and cultures. Asian Corridor in Heaven traces the ancient trade route through six 60-minute episodes that explore the history, culture, and passage of the Caravan Road, and showcase the breathtaking scenery that brought the route so close to heaven.

The Ancient Tea and Horse Caravan Road" is the world's oldest trade route which was opened 200 years prior to the Silk Road for trading Chinese finest tea with Tibetan horse. It is also a civilized trade route which is connected form Yunnan provinces in Southwest to Sichuan, and over to Tibet, Nepal and India.

The documentary "Chamagodo" -- or "The Asian Corridor in Heaven" -- takes viewers on a tour of a five-thousand-kilometer route from China's southwestern Yunnan Province to Tibet, Nepal and India. The HD documentary introduces the culture, history and civilization of the area. Chamagodo is known as the oldest trading route in the world that predates the Silk Road by 200 years.