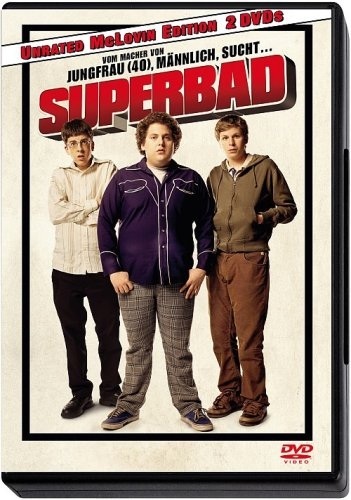 Superbad
Come and Get Some

Evan and Seth are two dorky high school guys. Evan is your prototypical "nice guy" who has a crush on his classmate Becca. Seth, on the other hand, is sex obsessed and vulgar. He's dying to get laid by any available female, but especially a girl named Jules. After Evan's super nerdy friend Fogell obtains a fake ID, the guys embark on a mission to impress the girls with their "coolness" by getting alcohol for Jules' party. From there all sorts of hilarious and wacky hi jinks ensue.

But this movie isn't so much about the plot as about the characters. In contrast to the glamourized and phony teens often depicted by Hollywood Seth and Evans seem real. They look, act and talk like actual teenagers, with all their vulgarity and false bravado attempting to mask their adolescent insecurities and confusion. Judd Apatow produced and Seth Rogen co-write and acted in this film. It shows, as this movie reflects the authenticity and excellence they achieved with "Freaks And Geeks" (my all time favorite TV program) more than any of their previous cinematic efforts.

But with comedy the ultimate goal is to be funny and this movie made me laugh more than any in recent memory. That combined with it's subtle intelligence, heart felt ending and insighful depiction of teen life makes it rank right up there among my all time favorite comedies.