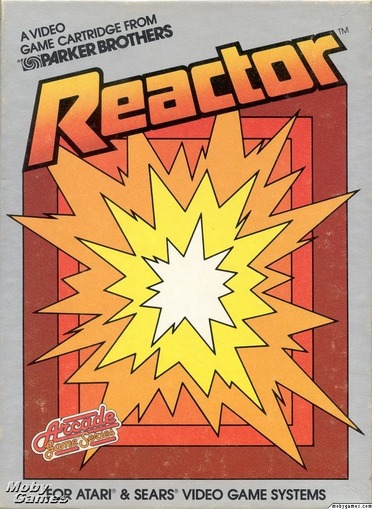 Reactor is a conversion of the arcade game. You control a space ship inside a nuclear reactor which you are trying to stop from melting down! The reactor core at the center of the screen is surrounded by a deadly kill wall. Roaming throughout the available space are positrons, neutrinos, and photons, all of which will be trying to knock your ship into the wall. To survive you will need to knock all of these attacking particles into the kill wall to destroy them. As each level progresses, the reactor core will slowly grow in size, making less and less room to maneuver in. Eventually the reactor core will melt down; to prevent this, you need to destroy all of the particles before time runs out! To help out, you start the game with a limited number of decoys. When a decoy is placed on the screen, all of the particles will be attracted to it instead of your ship. If you place the decoy close enough to the kill wall, this will make it easier to destroy the particles. Also inside the reactor are two sets of control rods (located on the left and right sides of the screen); If you destroy an entire set of rods by knocking the particles into them, the reactor core will shrink down in size, giving you more time for your battle. If you destroy both sets of rods, you earn an extra decoy.