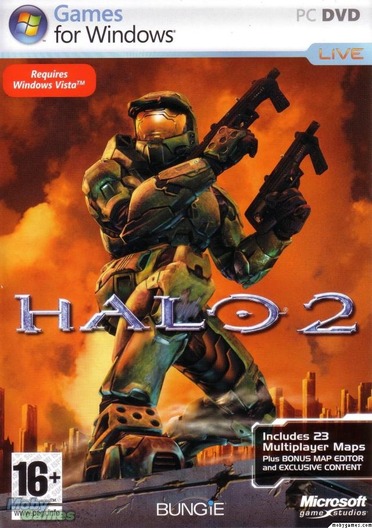 In the sequel to Halo, Spartan-117, better known as the Master Chief, has returned to Earth, where he is promptly needed: despite all precautions taken, the Covenant have discovered the location of humanity's homeworld and are launching their attack. For some reason, however, their fleet is much smaller than expected. To solve this mystery, the Chief must return to the stars, learning more about the mysterious Halo rings and their constructors.

Meanwhile, the Covenant Elite who commanded the fleet at the Halo construct is blamed for the destruction of the ring and branded a heretic. The High Prophets grant him another chance, however: he is made the Arbiter, a special operative for the Prophets, ordered to carry out impossible missions. He will be dealing with dissent and rebellion among the Covenant - a conflict where he might find himself to be on the wrong side.

The player controls both the Chief and the Arbiter in Halo 2, a first-person-shooter in the same style as the first game. Its main gameplay characteristics are the same: only two weapons can be carried at a time (leading to a tactical choice as to which are to be taken), instead of a standard health points system there is the recharging energy shield (leading to an emphasis on finding cover during firefights), AI-controlled teammates will fight along the protagonist, and there are lots of sections involving vehicles.

New features include the ability to double-wield certain weapons, doubling the firing rate at the expense of accuracy and the ability to execute melee attacks or throw grenades. Part of the weapon arsenal is unchanged from the first game, but there are also some additions. The human projectile weapons are mostly new and include a pistol, shotgun, SMG and battle rifle. Returning are the sniper rifle and the rocket launcher. The Covenant energy-based weapons (still prone to overheating) from Halo all return, and new additions include several heavy hitters like the Brute Shot and Fuel Rod Gun along with the projectile-based Carbine and the Beam Rifle, both useful for sniping. The Energy Sword is a powerful melee weapon, able to kill most enemies with a single strike.

All vehicles from the original game also return: Warthog jeeps and Scorpion tanks for the Humans, Banshee fliers, Ghost gliders and Wraith tanks for the Covenant. A new addition is the Covenant Spectre, which with its rear-mounted cannon wielded by a dedicated gunner is comparable to the Warthog. A new player ability concerning vehicles is to board them while in use and either kick off the driver and take over, or in the case of heavy tanks, throwing in a grenade.

The multiplayer component of the game has been greatly expanded. On the Xbox, Xbox Live is now supported in addition to split screen and system link. The campaign can be played by two players in split screen. Competitive game types include Slayer and Team Slayer (standard free-for-all deathmatch), Capture the Flag, Assault (planting a bomb in the enemy base), Territories (controlling sections of a map for a certain amount of time), Oddball (finding a skull on the map and then holding on to it as long as possible) and more. All types have several built-in variants and can also be customized further. Players can choose from Spartan and Covenant Elite skins. The PC version comes with a map editor.