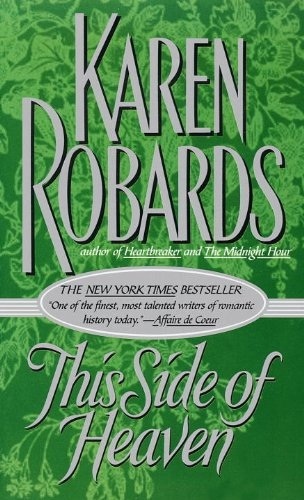 This Side of Heaven

Defiantly beautiful, Caroline Wetherby stepped ashore in a land so wild and fierce, she trembled.  She had come seeking refuge with the last of her family, but her sister was dead.  Waiting to greet her were pious Pilgrims, warring Indians, howling wolves, a boisterous household of men and boys...and "him", her rugged, unwelcoming brother-in-law, Matt Mathieson.  Caroline wanted to hate Matt as she hated all men.

After her father's death, she'd been eager to escape England.  But as daughter of a gambler and a gypsy, her flamboyant ways and healing skills tempted disaster in the sanctimonious Connecticut Colony.  And putting herself in the hands of a big, handsome stranger tempted something far more dangerous--emotions she couldn't resist, kisses she couldn't forget, and a future that could bring ruin...or a journey to heaven on earth in his arms.

"From the Paperback edition."