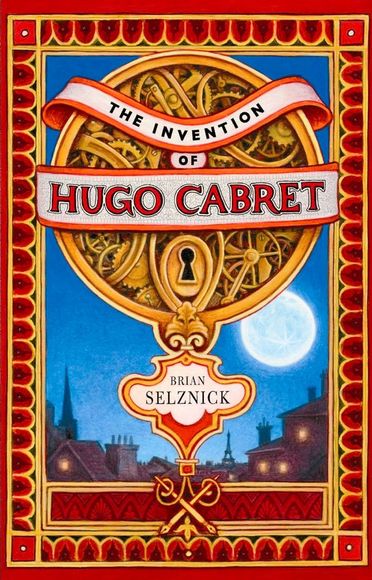 The Invention of Hugo Cabret

Book Description:
Orphan, clock keeper, and thief, Hugo lives in the walls of a busy Paris train station, where his survival depends on secrets and anonymity. But when his world suddenly interlocks with an eccentric, bookish girl and a bitter old man who runs a toy booth in the station, Hugo's undercover life, and his most precious secret, are put in jeopardy. A cryptic drawing, a treasured notebook, a stolen key, a mechanical man, and a hidden message from Hugo's dead father form the backbone of this intricate, tender, and spellbinding mystery.

Amazon.com Exclusive
A Letter from Brian Selznick
 
Dear readers,
When I was a kid, two of my favorite books were by an amazing man named Remy Charlip. Fortunately and Thirteen fascinated me in part because, in both books, the very act of turning the pages plays a pivotal role in telling the story. Each turn reveals something new in a way that builds on the image on the previous page. Now that Iâ€™m an illustrator myself, Iâ€™ve often thought about this dramatic storytelling device and all of its creative possibilities.
My new book, The Invention of Hugo Cabret, is a 550 page novel in words and pictures. But unlike most novels, the images in my new book don't just illustrate the story; they help tell it. I've used the lessons I learned from Remy Charlip and other masters of the picture book to create something that is not a exactly a novel, not quite a picture book, not really a graphic novel, or a flip book or a movie, but a combination of all these things.
I began thinking about this book ten years ago after seeing some of the magical films of Georges MÃ©liÃ¨s, the father of science-fiction movies. But it wasnâ€™t until I read a book called Edison's Eve: The Quest for Mechanical Life by Gaby Woods that my story began to come into focus. I discovered that MÃ©liÃ¨s had a collection of mechanical, wind-up figures (called automata) that were donated to a museum, but which were later destroyed and thrown away. Instantly, I imagined a boy discovering these broken, rusty machines in the garbage, stealing one and attempting to fix it. At that moment, Hugo Cabret was born.
A few years ago, I had the honor of meeting Remy Charlip, and I'm proud to say that we've become friends. Last December he was asking me what I was working on, and as I was describing this book to him, I realized that Remy looks exactly like Georges MÃ©liÃ¨s. I excitedly asked him to pose as the character in my book, and fortunately, he said yes. So every time you see MÃ©liÃ¨s in The Invention of Hugo Cabret, the person you are really looking at is my dear friend Remy Charlip, who continues to inspire everyone who has the great pleasure of knowing him or seeing his work.
Paris in the 1930's, a thief, a broken machine, a strange girl, a mean old man, and the secrets that tie them all together... Welcome to The Invention of Hugo Cabret.
Yours,
Brian Selznick

Amazon.com Exclusive
 
Brian Selznick on a "Deleted Scene" from The Invention of Hugo Cabret  This is a finished drawing that I had to cut from The Invention of Hugo Cabret. I was still rewriting the book when I had to begin the final art. There was originally a scene in the story where this character, Etienne, is working in a camera shop. On one of my research trips to Paris I spent an entire day visiting old camera shops and photographing cameras from the 1930's and earlier, as well as the facades of the shops themselves. I researched original French camera posters and made sure that the counter and the shelves were accurate to the time period. I did all the drawings in the book at 1/4 scale, so they were very small and I often had to use a magnifying glass to help me see what I was drawing. After I finished this drawing I continued to rewrite, and for various reasons I realized that I needed to move this scene from the camera shop to the French Film Academy, which meant that I had to cut this picture. I tried really hard to find ANOTHER moment when I could have Etienne in a camera shop, but, as painful as it was, I knew the picture had to go. I'm glad to see it up on the Amazon website because otherwise no one would have ever seen all those tiny cameras I researched and drew so carefully!
--Brian Selznick