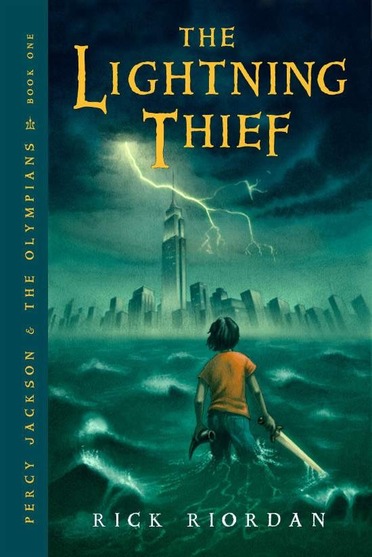 Percy Jackson has always been different from other kids. He's dyslexic and suffers from ADHD, and is always getting into trouble. He's been expelled several times, and the only thing that holds his interest is Greek mythology.

We soon learn that Percy has close ties with Mount Olympus, and when monsters from mythology start popping up looking for his blood, he ends up at a very special school for kids like himself, where he starts to put things together to find out who he really is.

Before he knows it, he's off on a quest with his two friends, Grover and Annabeth, to recover a powerful lightning bolt, property of Zeus, which has been stolen, supposedly by Percy himself. Zeus, Poseidon and Hades are having a little disagreement about the theft of the said lightning bolt, and unless Percy can retrieve it and return it in time, the resulting fallout will have earth-shattering consequences.

This great (albeit relatively unknown) first book of the series is an easy read, and is sure to encourage young readers to improve their knowledge of Greek mythology, especially the stories of the Minotaur, Medusa and the gods Poseidon, Ares, Zeus, Hades, Kronos, Athena and so on. Highly recommended for young readers in search of an original and imaginative adventure series.