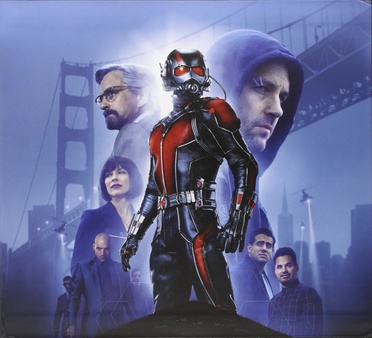 Marvel's Ant-Man: The Art of the Movie Slipcase

Experience the true scale of the Marvel Cinematic Universe through the latest entry in Marvel's ART OF series. Armed with the astonishing ability to shrink in scale but increase in strength, master thief Scott Lang must embrace his inner hero and help his mentor, Dr. Hank Pym, protect the secret behind his spectacular Ant-Man suit from a new generation of towering threats. Stars Paul Rudd and Michael Douglas take up the mantles of Scott Lang and Hank Pym as Marv el's Ant-Man brings a founding member of the Avengers to the big screen for the first time. In this keepsake volume, explore the pages of script secrets and production designs that showcase the creativity of Marvel's talented filmmakers. With intricate concept art, full-color photography from the set and finished film, and commentary from the filmmakers, including Director Peyton Reed, this collectible will delight new and old fans alike.