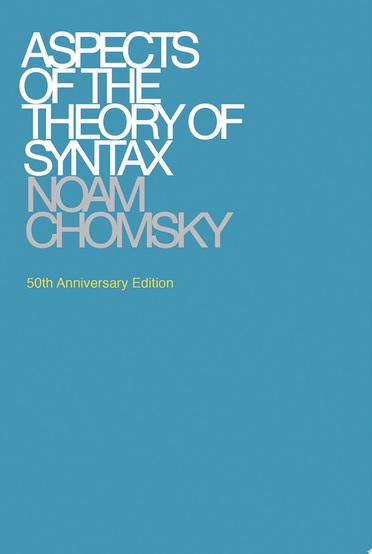 Aspects of the Theory of Syntax

The fiftieth anniversary edition of a landmark work in generative grammar that continues to be influential, with a new preface by the author.

Noam Chomsky's "Aspects of the Theory of Syntax", published in 1965, was a landmark work in generative grammar that introduced certain technical innovations still drawn upon in contemporary work. The fiftieth anniversary edition of this influential book includes a new preface by the author that identifies proposals that seem to be of lasting significance, reviews changes and improvements in the formulation and implementation of basic ideas, and addresses some of the controversies that arose over the general framework.

Beginning in the mid-fifties and emanating largely from MIT, linguists developed an approach to linguistic theory and to the study of the structure of particular languages that diverged in many respects from conventional modern linguistics. Although the new approach was connected to the traditional study of languages, it differed enough in its specific conclusions about the structure of language to warrant a name, “generative grammar.” Various deficiencies were discovered in the first attempts to formulate a theory of transformational generative grammar and in the descriptive analysis of particular languages that motivated these formulations. At the same time, it became apparent that these formulations can be extended and deepened. In this book, Chomsky reviews these developments and proposes a reformulation of the theory of transformational generative grammar that takes them into account. The emphasis in this study is syntax; semantic and phonological aspects of the language structure are discussed only insofar as they bear on syntactic theory.