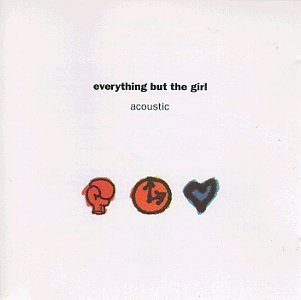 Acoustic
Everything But The Girl

Though they've worked with plenty of accompaniment, the heart of Everything but the Girl's music has always been simple: a voice (usually Tracy Thorn's), a simple melody, and enough emotion to keep Kleenex in business for decades. On "Acoustic", Thorn and Ben Watt strip things down to the bone, and the starkness makes the music even more affecting than usual. Of course, it doesn't hurt that the material they've chosen to work with is pretty affecting to begin with. The five covers are fantastic (Mickey and Sylvia's "Love Is Strange," Bruce Springsteen's "Tougher Than the Rest," Cyndi Lauper's "Time After Time," Elvis Costello's "Allison," and Tom Waits's "Downtown Train"), but the five originals, all of which appear on other EBTG albums, hold their own; and three of them--"Driving," "Apron Strings," and "Me and Bobby D"--do much more that that.--Randy Silver