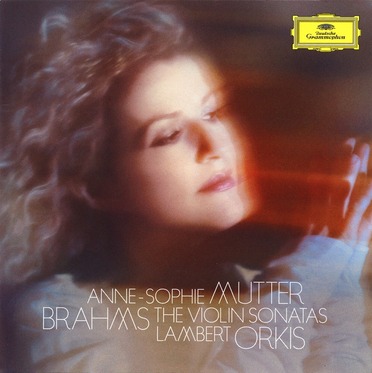 Staples of the violin repertoire, the three violin sonatas of Johannes Brahms, project three entirely different characters: the G major Sonata's solemn, lonely beauty; the exuberance and freedom of the A major Sonata; and the aggressive, agitated D minor Sonata. As much as the sonatas contrast with one another, so to does Anne-Sophie Mutter's playing of them. Her vision throughout this Deutsche Grammophon collaboration with pianist Lambert Orkis seems to be built on creating broad distinctions in dynamic range, tempo, and tone color. Mutter's tempo selection are more varied than some listeners may be used to; for example, the transition between the Andante tranquillo and Vivace sections of the A major's second movement is quite stark, and the D minor Sonata's Finale is ambitiously driven. Mutter also makes big tempo changes within movements, but always keeps her rubato tasteful and meaningful. The result is a passionate, robust Brahms whose intensity always keep listeners guessing exactly what's going to happen next. The one possible downside to Mutter's playing on this album is her vibrato, which can be tiresomely wide and intense without the same variety that she incorporates into other aspects of her playing. Like Mutter, Orkis' playing is equally passionate and exuberant, and the two musicians play off each other in a completely organic, symbiotic way. Balance between the two is impeccable, and overall sound quality is rich and powerful, though perhaps a bit bright.