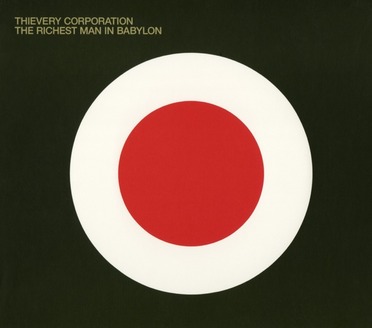 Even more similar to its predecessor, The Mirror Conspiracy, than that one was to the first Thievery Corporation LP, The Richest Man in Babylon provides some beat-heavy, languorous excursions into territory long-favored by Thievery Corporation -- namely, the music of Brazil, India, and Jamaica -- but doesn't have the hooks or the production finesse to compete with The Mirror Conspiracy. On the opener, "Heaven's Gonna Burn Your Eyes," guest Emiliana Torrini treasures her vocals endearingly, but the backing could've been taken wholesale from any of a dozen Thievery productions (or perhaps Air's Moon Safari). "The Outernationalist," a bass-heavy trip into ambient-dub headspace, sounds great too, but it also occupies the same territory as a previous track (2000's "Treasure"). Vocalists LouLou and Pam Bricker both return for two features each, practically indistinguishable from their previous tracks. (Of course, it's difficult to resist a bland sound when the bassline for an entire song, "Un Simple Histoire (A Simple Story)," encompasses only four different notes and continues throughout.) Fortunately, a few tracks on the backside do plow new ground, thanks in part to new guests: "Meu Destino (My Destiny)," with the ephemeral falsetto of Patrick de Santos; "Exilio (Exile)," which introduces Afro-Cuban percussion into the Thievery template; and a great feature for Shinehead on "The State of the Union," while Garza and Hilton throw in a few extra beats (for once). Admittedly, a solid set of treading-water productions is vastly preferred to a bad album, especially on the dancefloor. Sure, it could've been worse, but it also could've been slightly different.