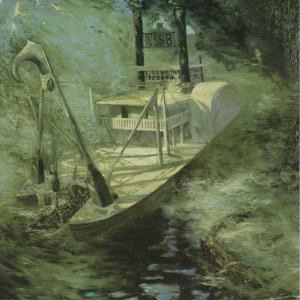 Up until this album, it seemed as though Lambchop's blend of classic country and pop never properly congealed for more than the span of a single or two. Luckily, on Thriller, the Nashville ensemble is headed in the right direction. The band plays eight songs that blend the vocalese of Burl Ives, the guitar textures of Sonic Youth (at low volume), some glockenspiel moments reminiscent of alpine folk tunes, and the spirit of Hank Williams. The bulk of the tunes on Thriller lean toward the atmospheric, with lyrics that sound more like spoken word than pop ballads. Tracks like "Your Fucking Sunny Day" and "Hey, Where's Your Girl" are quicker and fun, and seemingly less self-conscious. This is easily one of the group's better efforts, even if the seventh track, the slow-but-infectious "The Old Fat Robin," should've been sequenced last. It would've been a sweet ending and left the listener yearning for more from the group. --Jason Verlinde