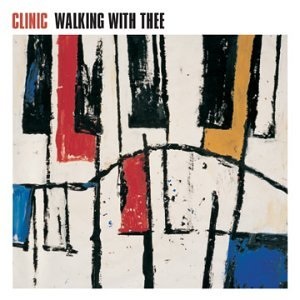 Fans of the Clinic's uniquely eerie take on '60s and '70s U.S. garage rock will be pleased by their second long player, Walking with Thee, which contains the same amount of malevolence lurking within. It also sounds quite marvelous. On their debut album, Internal Wrangler, this British four-piece displayed a ferocious, focused melding of garage, art rock, Krautrock, surf, and any other left-field genre you'd care to mention. Clinic will no doubt tire of the continual Velvet Underground comparisons, but while they have mined rock's cooler record collections, they've nevertheless created disorientating and utterly compelling music. From the bass-driven chug of "Welcome" (a heady collision of the Ronettes and '60s sci-fi soundtrack music) to the sweat-drenched derangement of "Pet Eunoch," Clinic are clearly in thrall to mid-'70s New York, but among the detached, icy vocals and Suicide-like minimalism, the album contains electronic undercurrents and off-kilter pop moments that are the band's own. The pervasive mood is of unease and disquiet; on the unsettling closer, "For the Wars," Ade Blackburn sings, "Now it's safe and warm." And, of course, it's anything but. --Suzannah Brown