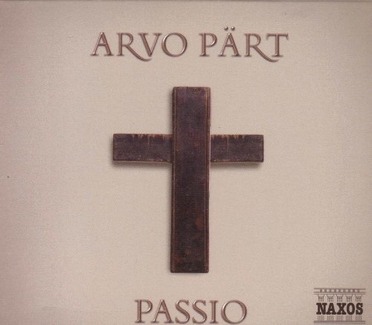 Composed in 1982 and later recorded by the Hilliard Ensemble on ECM, Arvo Pärt's Passio (Passion According to St. John) made its composer famous, and rightly so. It is a work of unique beauty. Its meditative, intensely spiritual quality is static; the listener will find no outbursts or overtly dramatic moments to latch on to as one does in Bach's Passions. Here the story is told with a lack of overt emotionalism which quickly becomes hypnotic. Jesus is a bass, he is accompanied by an organ, all his words are intoned slowly, on lengthy note values. The role of the Evangelist is taken by four voices--a soprano, alto, tenor, and bass--and they are accompanied, on short note values and in different groupings (and frequently dissonantly), by one each of violin, cello, oboe, and bassoon. Pilate is a tenor. This new performance cuts 10 minutes off the 71-minute timing on the ECM recording; still, it can't be accused of treating the music lightly or with anything other than the respect and dignity it deserves. The final eight-word prayer, which ends in a beautiful, life-affirming D-major chord is taken, in fact, too slowly--the novice listener may presume one of the too-long pauses is the work's end. But aside from this miscalculation, this new performance is glorious, and at less than half the price of the ECM (or one on Elektra), should be in the collection of anyone interested in devotional music, beautiful music, and/or the phenomenon that is Arvo Pärt. Very highly recommended. --Robert Levine