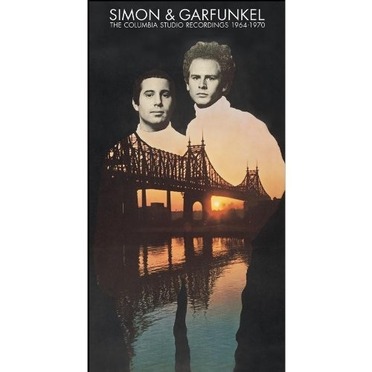 Though the American folk movement of the early '60s would influence bands like the Byrds and Buffalo Springfield and a score of oh-so-sensitive '70s singer-songwriters, its two most looming successes during the decade--Bob Dylan and Simon and Garfunkel--couldn't have seemed more disparate. While Dylan turned hard-left, outraging many a folk purist by zealously embracing rootsy blues-rock and its electrified cacophony, S&G veered toward the center, equally infuriating snooty pundits by embracing a Top 40 pop sense whose ostensible shallowness often belied its rich musical diversity. In retrospect, Simon and Garfunkel's career as a duo was remarkably brief (five albums in six years), if no less commercially potent (a slew of Top 40 singles, two Number One albums, and the requisite handful of Grammy Awards). This box set compiles digitally remastered versions of the original S&G albums, each expanded to include bonus tracks (mostly previously unissued demos with a few scattered outtakes, the quartet on Sounds of Silence the best of the lot) and a booklet featuring new notes for each album and song lyrics. It's a rewarding journey, wending from the almost slavish folk devotion of Wednesday Morning 3 AM through the greeting-card iconoclasm of Sounds of Silence, the madrigal-pop of Parsley, Sage, Rosemary, and Thyme to the increasingly impressionistic lyrical landscape of Bookends. It also covers the rich musical tapestry of Bridge over Troubled Waters, which foreshadowed Simon's own diverse solo career by embracing everything from the Everlys and Jan & Dean to Andean folk and R&B. --Jerry McCulley